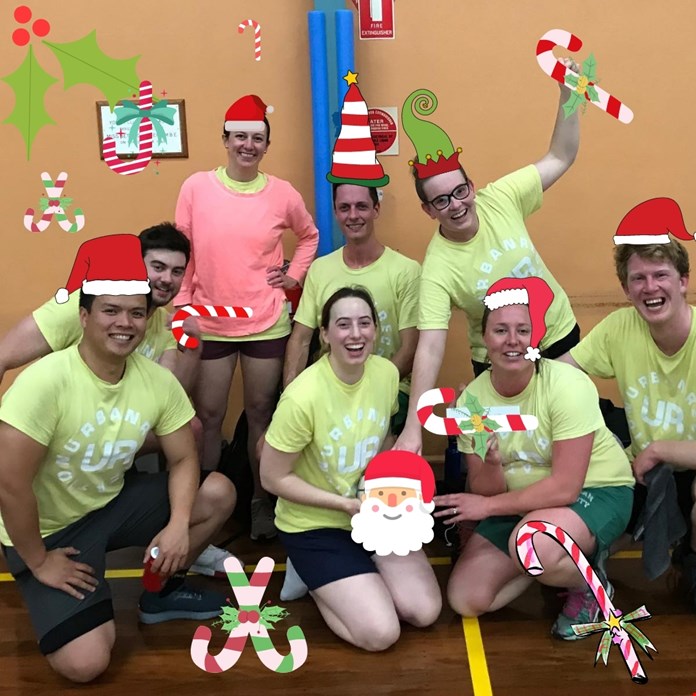 The Christmas Candy Cane Hunt is on!

It's Christmas and we want to celebrate with you!

Over the next week Santa and his friendly elves will be doing the rounds at all the leagues. If you happen to find a candy cane then you are in LUCK! We will be giving away a $200 UR credit to one lucky winner. If you find a candy cane anywhere.... in your open bag, in your shoes, on the court or in your hat, snap a photo, tag us on your socials @urbanrecnewcastle and you will be in the running.

Winner of the $200 voucher will be announced December 22, a nice early Christmas present for 1 lucky winner. 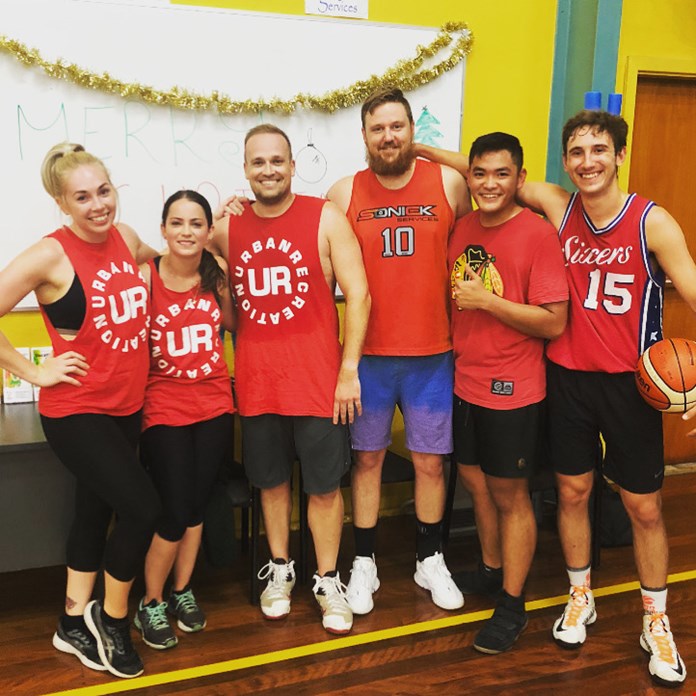 Go in the draw to win your team registration back for summer!

If your team is planning on returning for the Summer season then listen up! Your captain will be sent a link to re-register into the Summer competition between November 25 – December 2. Once your team has registered using the link, your team will be placed in the draw to win Free Registration! Woooohooo!

HOW DOES IT WORK?

The team that is drawn will win free registration for the Summer season and will be refunded their team fee in late December. We will annouce the winner in the last week of the Spring Season.

WHEN DOES MY TEAM NEED TO REGISTER BY?

The link your captain will get sent will expire on December 2. If your squad isn’t registered by then, you will miss out on going in the draw to win free registration.

WHEN WILL IT BE DRAWN?

The competition will be drawn in the last week of the Spring competition.  We will post the winners on our social media account and send an email to the winning team.

Remember you’ve got to be in it to WIN it, so make sure you get your captain to register your team.

Pay the full registration amount, no deposits are allowed and only teams playing in the current Spring season are eligble. 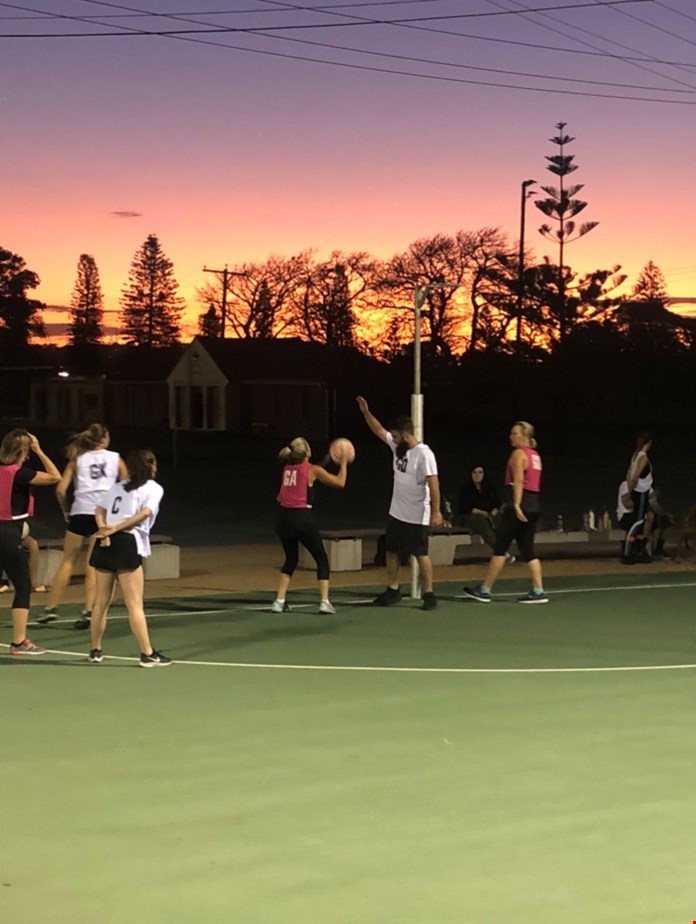 Well it’s been a hell of a year to say the least. But we made it thorugh and we are supplynh our members with plenty of options to play sport socially in 2021. If you are looking at playing with us this season, this is what you can get involved in. All our sports take individual and team registrations so you can sign up solo or grab a few mates and register a team.

WHAT ARE YOU WAITING FOR?? Sign up and strap yourself in for a summer filled with sport! 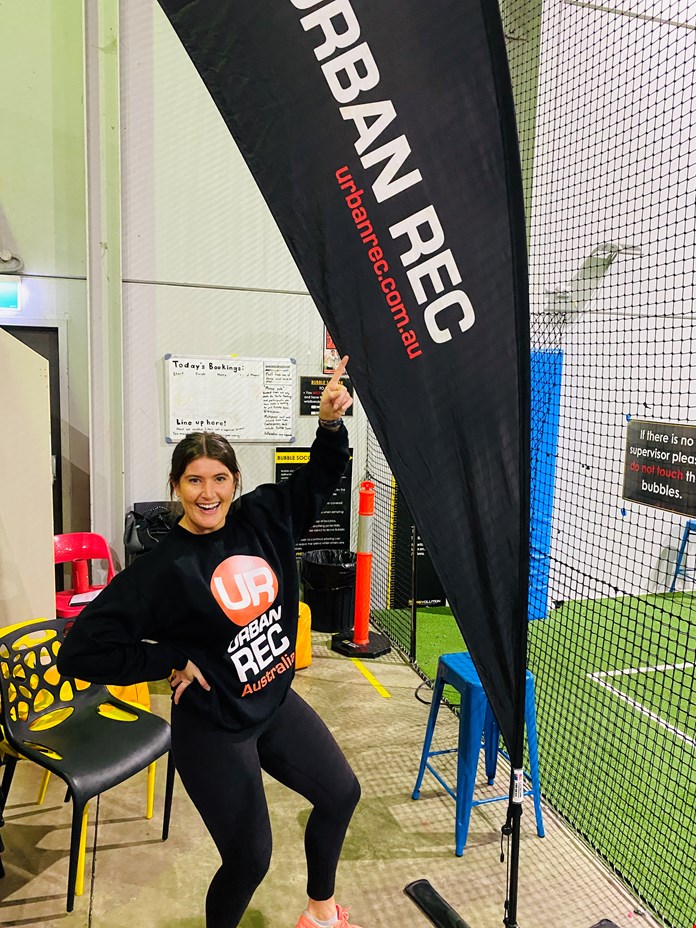 Riley has only recently started hosting with us this season. She has been a great addition to the team, with her laid back personality and love of sport. Whilst balancing her teaching studies and working she has also started playing AFL this season for Newcastle City and from all reports is absolutely killing it!! In between her crazy schedule she also fits in a sneaky fix of the show SUITS, she is a big fan of the show, but who isn’t amirigt? We sat down with her to find out more about what Riley does to keep busy and how nerdy she really is. 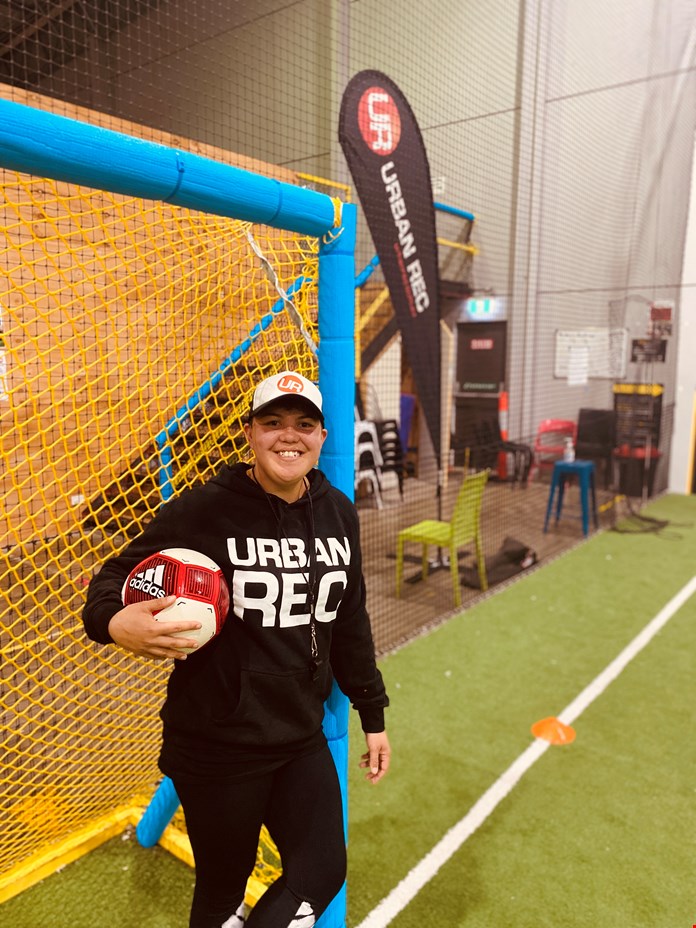 Ashley hosts our Street Soccer league on Wednesday nights. This is Ashley’s first season of hosting with Urban Rec but previous to this she played street soccer for a few seasons. In between playing sport every other night of the week and hosting with us she is studying Exercise and Sport Science.

A Newy local, Ash likes to keep busy in her spare time either playing soccer for Maitland or skateboarding the streets of Newcastle. We sat down with Ash and asked her a few questions.

1. What is the coolest thing about working for urban rec? This will be my first season hosting so I’ll let you know...

2. How did you get involved with urban rec? I joined as an individual after seeing an ad in Facebook

3. What is your favourite sport? It’s a toss up between soccer and athletics. Both to play and watch.

4. What do you do when you’re not Event Hosting?  When I’m not hosting at urban rec you can usually find me playing soccer or at the moment trying to teach myself to skateboard.

5. What is the nerdiest thing you do in your free time? During iso, I decided to take up knitting... that’s nerdy right haha

6. What is your go to karaoke song?  Gold digger - Kanye west

8. Name one celebrity dead or alive that you would love to have dinner with. Cathy freeman!

9. What are five things you would take with you in a zombie apocalypse. Food, water, flash light, some sort of weapon and a tent?

3. Have no eyebrows or only one eyebrow? Haha far out, does a monobrow count as one eyebrow?

5. Be invisible or fly? Fly 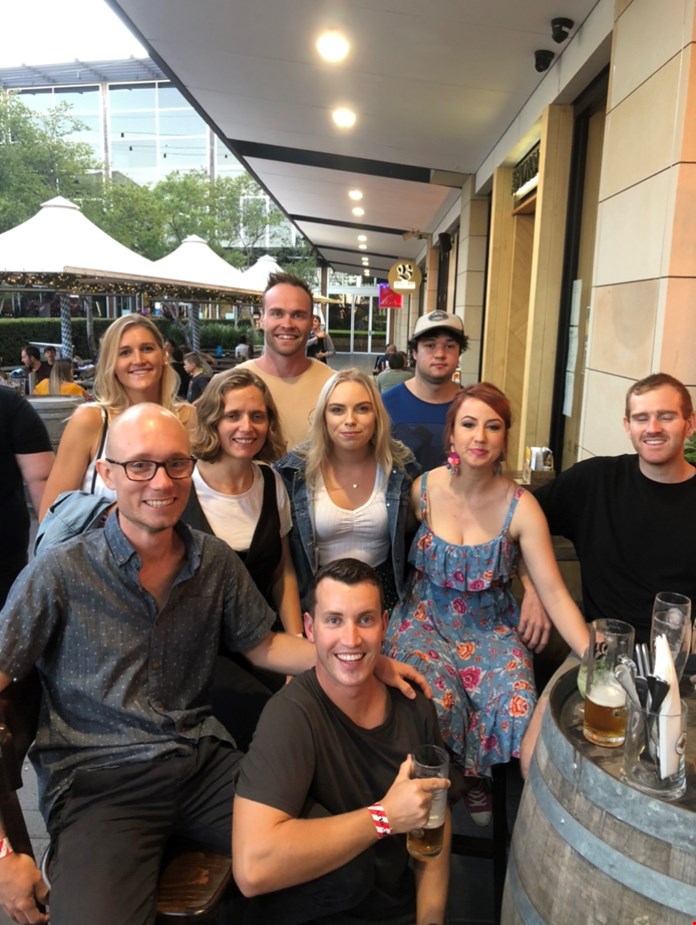 The hospitality industry has been hit hard these last few months and we want to do our bit to help them out. If your team registers into one of our Spring League during out Priority Registration Week then we will buy you guys a $50 voucher to spend at your leagues clubhouse.

We are doing our best to support local businesses around Newcastle at this time and we want you to be apart of it. Here is the dealio….

Please reach out to us at [email protected] if you have any questions, as we have all the answers your heart may desire.

We are so excited to see you all on the court, field or pitch soon this Spring season!

Keelan is the OG of Urban Rec. He hosted the first season of Basketball back in March 2019 and has been with us ever since. He has been shooting hoops for years and is a super chill guy. He has a few tricks up his sleeve and knows a thing or two about how much elite athletes are paid. We sat down with Keelan and asked him a few questions to help you get to know this man better. 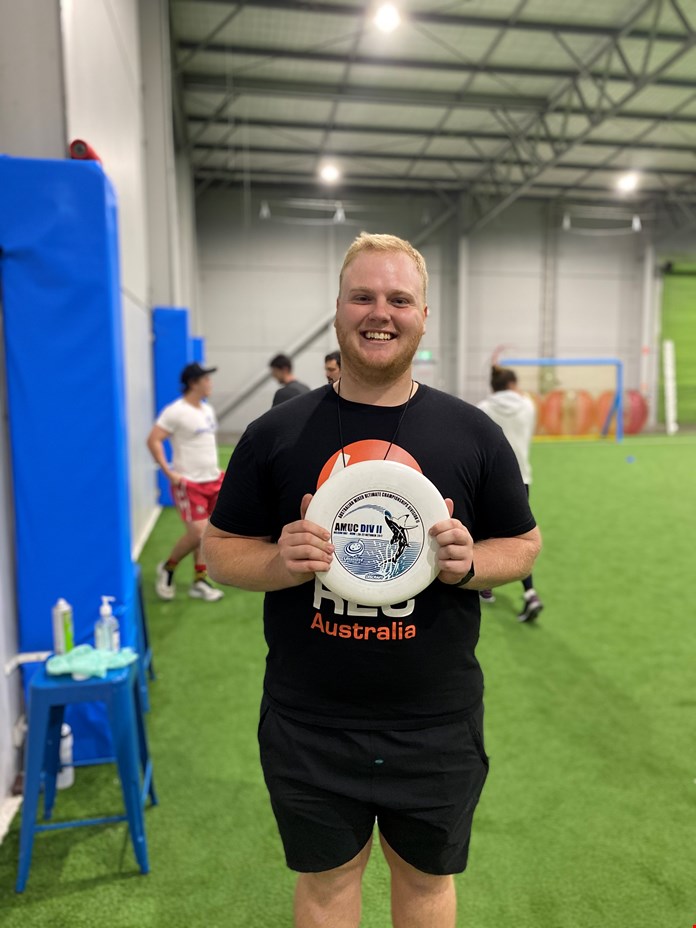 Liam started playing multisport with us back in early 2019 and loved it so much he got involved in hosting. He is our Multisport guru and hosts the league on Monday nights. You may have seen him at one of our other leagues from time to time, he has also hosted Street soccer and Flag Gridiron. He is currently finishing of his final semester of Primary Teaching and plays a bit of golf in his spare time.

We sat down with Liam and asked him a few questions to learn more about the man behind the multisport whistle and here is what we found out.

Urban Rec has increased our prices this season, and we would like to take this opportunity to explain.

As a club we have not increased our team fees since we first started back in February 2019. In that time every over-head associated with running our leagues and sports club have inflated beyond what is sustainable with the current registration fee rate. Although the fee increase to our members happened from one season to the next, the costs incurred to us as a club has been rising for years.

On average the fee increase for a 10 week season has increased from between $10 – $19 for the entire 10 game season, in other words $1- $2 per game. We have also added the UR Draft that you get free access to. See below for more information about this new program.

The three most obvious overhead increases are court hire, staffing and insurances.

Although we are not technically a not-for-profit, our business model is run as such, with all profits re-invested in the club. We rely on volume and return customers - not high profits.

We are really competitive when it comes to registration fees compared to the vast majority of our Industry. Our mission is to make sport accessible for everyone.

The other stuff we do as part of your fees? Urban Rec likes to offer all kinds of free or discounted opportunities for our members, things like; UR Awesome, Pub Nights, discounts at clubhouses, free jugs seasonally, Pri-Rego Promo’s, FreePlay nights, and social events (which run without profit also).

This is another perk that you now get when you sign up as an individual. Each Monday at 5pm we update the draft with a list of individual teams that need players for the season. Check out the link about the UR Draft for more information.

The bottom line is, we truly believe that what we deliver to our members exceeds any of our competitors in the sport and fitness industry – and we will always continue to offer value for money for our members. 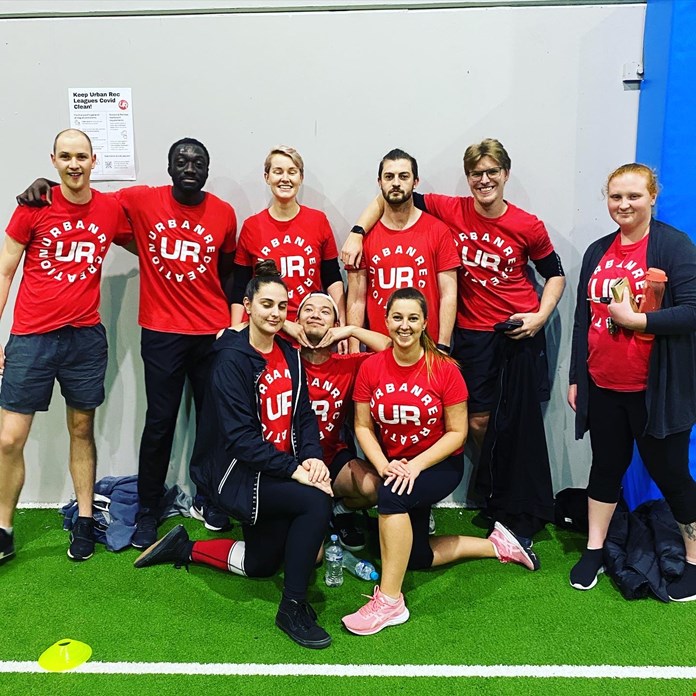 This lovely group of people are amazing characters that turn up each week to play sport, get active and have a laugh but more importantly head to the Albion Hotel for a beverage afterwards. It is a rarity to not see these guys at the pub, playing pool, grabbing a bite to eat or just making the most of their free schooner vouchers.

They are a complete success story of what our number one goal is at Urban Rec - getting people together to mingle with people they wouldn’t normally meet. Getting out of your comfort zone and taking that leap. They are often heading out to dinner or organising activities to do throughout the week and we absolutely froth it.

They all wear their red t-shirts with pride each week and Brendan, the captain of the team, is great at organising them and getting them to register back up every season. They are heading into their third season with us next week and we can’t wait to see what they wear during dress up round.

If you get the chance to play against them – you’re lucky – they won the fun points last season and are always a good laugh.

Shout out to Pat, Phil, Beth, Keira, John, Corey, Anastasia, Brit and Brendan for being such legends on and off the field.

It can be daunting signing up as an individual, not knowing anyone or how the league works, but if this teams story is anything to go by, its definitely worth it!