King/Queen of the Flag Gridiron Field

The Weather Gods blessed us with a fabulous evening on Wednesday night, perfect conditions for the first ever night of Flag Football in Newcastle. With a stack of newbies showing up it was so good to see new faces to Urban Rec as well as a bunch of veterans.

There are a few things we are doing differently this competition. It is a 6 week competition so instead of the usual 10 weeks we run, we are changing it up so that players are scored on their participation, win and MVP status. The players at the end of the season with the highest MVP points will win the prizes.

The scores for the first round are listed below. Here is how it works..

We will post updated scores after next weeks game but for the last 4 weeks of the competition we will keep it a secret so it’s a nice surprise at the end. Honestly, who doesn’t love surprises!?

Week 2 of Flag Gridiron involved teams being seperated into groups depending on their Birth Month. That meant players were able to play against their mates. Some players were absolutely loving the fact they could burn their friends with a sideline dash and touch down. It’s creating a very social vibe down at Waratah Park of a Wednesday evening with many of them heading to the Royal Inn Hotel for a beverage and debrief after the game.

Here are the scores for this week. We won’t be posting any scores after this week, so it is your last chance to get a glimpse of where everyone is at. 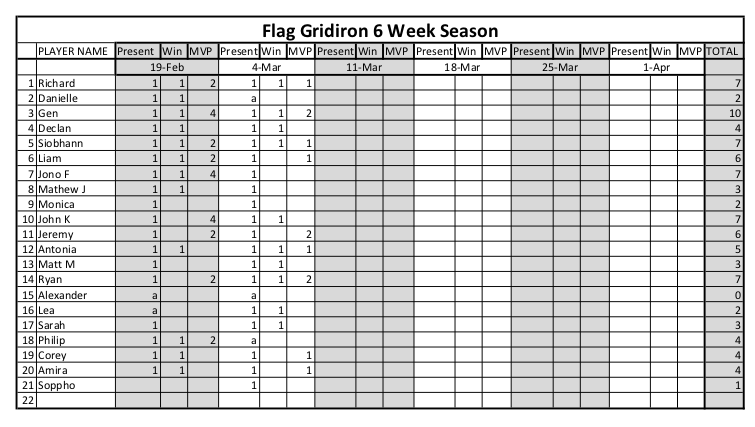